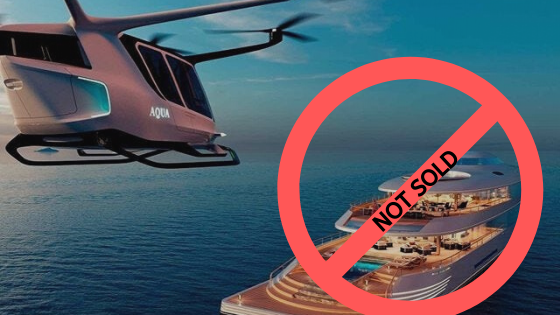 We can definitively answer the question, is Bill Gates buying a hydrogen superyacht? NO he is not.

Reports came out February 8th that Bill Gates was buying Sinot’s upcoming $500m Hydrogen Superyacht. The Yacht, based on a concept shown in 2019 in Monaco, was 112 meters long, cost $644m US, and is powered by Hydrogen. At this point Sinot has only released a 2 meter model.

The yacht also has five decks and enough space to accommodate dozens of people. At face value, this yacht seems like something that Gates would be interested in purchasing seeing as many of his efforts have focused on ways to reduce emissions and protect the environment. While Bill Gates is not buying the concept, Sinot is welcoming “any visionary client to show their interest.”

Sinot said it had “no business relationship” with Bill Gates.

It added that that the concept superyacht, named Aqua, was “not linked” to either Gates or any of his representatives.

“Aqua is a concept under development and has not been sold to Mr Gates,” a spokeswoman said. She added that it was shown “in Monaco [and] meant to build a better future, and inspire clients and the industry.”

Multiple media outlets have reached out to Gates, he could not be reached for comment.

So for the question, is Bill Gates buying a hydrogen superyacht? The answer right now is a definitive NO.

Read on for more on hydrogen fuel research for Maritime use.

The search for a cleaner more climate-friendly maritime fuel has turned toward hydrogen. A San Francisco Bay ferry operator has spoken to the energy department about converting a ferry to Hydrogen

“There’s been a lot of interest in putting hydrogen fuel cells on boats,” says Leonard Klebanoff, a researcher at Sandia. Around 2014, he and his then-research partner, Joe Pratt, started systematically analyzing whether current ships could be retrofitted to run using hydrogen fuel cells instead of fossil fuels.

The answer, they found, was yes.

The main issue was about size. For each unit of energy, liquid hydrogen is about four times larger by volume than conventional diesel, so many engineers worried that it might not be possible to fit enough fuel onto ships. Liquefied natural gas has a similar size problem and doesn’t come with the zero-carbon benefits of hydrogen.

But “the efficiency of a fuel cell is about twice as much as a diesel engine,” Klebanoff says, “[so] you end up needing only about twice as much volume for the same endurance.” And the gigantic internal combustion engines that currently take up lots of space on ships would be unnecessary on a vessel powered by hydrogen.

When they analyzed the entire system, Klebanoff and Pratt found that it would be possible to retrofit most types of existing vessels to run on hydrogen and even easier to construct a new ship powered by fuel cells.

“The technology is all here,” Pratt says. “There’s no reason why we couldn’t make all these vessels zero emission today.”

In 2018, Pratt left Sandia to prove it. He co-founded a company called Golden Gate Zero Emission Marine, drew up detailed construction plans for a hydrogen-powered ferry and persuaded the state of California to contribute $3 million to fund a pilot project.

Related: Man Pumps 30 Gallons of Fuel into his rod holder