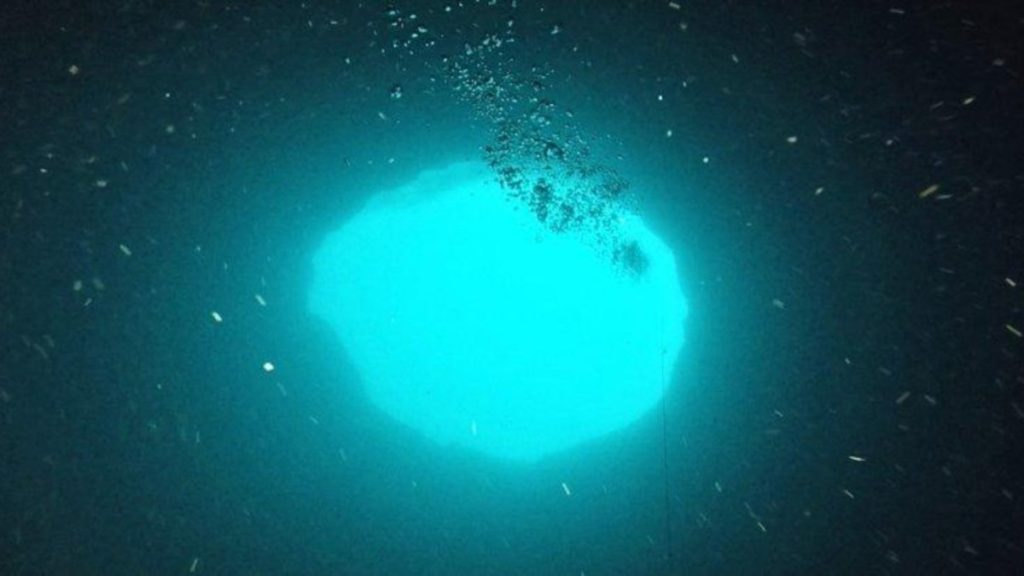 A 3 year NOAA backed research project is set to begin at the mysterious Blue Hole that has appeared off the Florida Gulf Coast. The Blue Hole dubbed “Green Banana” has intrigued scientists and researchers who plan to dive down and investigate the 425 foot deep hole.

The glowing mystery hole opened up at a depth of 155ft, the hole reaches a depth of 425 feet and is similar to a sinkhole on land. Typically blue holes are reported by fishermen and recreational divers, not scientists, because of the random nature in which they appear. These “sinkholes of the sea” represent a valuable opportunity for scientists seeking to learn more about the life-forms and underwater conditions that occur in these unique marine formations. The aim of this research is to examine what kind of microbes live in the blue hole, to measure nutrient levels in the underwater column, and assess whether the sinkhole is somehow connected to Florida’s groundwater system adjacent to the Gulf of Mexico.

After August’s dive, another is scheduled to take place next year at another Florida blue hole, called Amberjack Hole, which is significantly smaller than Green Banana – with a rim at 34 metres (113 ft) below the ocean surface, and extending down for about 72 metres (237 ft) below that. The first dive there revealed 2 deceased Sawfish, an endangered species. According to phys.org the deceased sawfish were intact enough to be collected for research, and the scientists quickly reported the discovery to NOAA and the Fish and Wildlife Conservation Commission and obtained the required permit for collection of one of the sawfish, a male measuring an impressive 12 feet long.

It will be some time before reports are compiled from the Green Banana expedition, but sciencealert.com reports that samples that were recovered at the first dive at Amberjack Hole have already shown large amounts of dissolved inorganic carbon in the water. Researchers say this contributes to the carbon cycle, possibly as a food source for microbial populations.

There were also signs of nutrient flux travelling upwards in the sinkhole, meaning that some food sources could eventually emerge from the blue hole, even while other creatures (like the Sawfish) slowly sink to the bottom. There was also evidence of groundwater in the blue hole which suggests there could be an underwater connection linking the Floridan Aquifer to the Gulf of Mexico.

Whether the Green Banana can corroborate that evidence remains to be seen, we hope that the researchers are able to help us better understand what goes on inside these sinkholes under the sea.

Recent Story: Sailor Bill Norrie was alone at sea for 4 months before returning to a changed world

Boat Fails from around the world