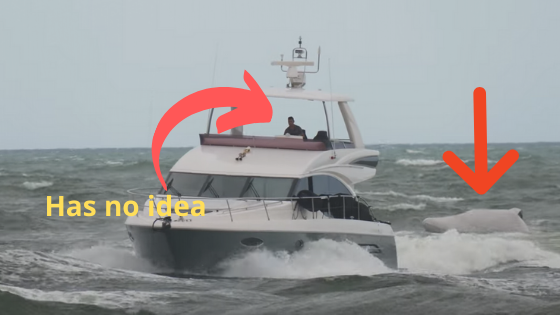 As you have probably noticed from recent Haulover Inlet Videos, the waves have been huge at Haulover Inlet! Boaters are faced with strong currents, wind, confused seas, and big swells as soon as they emerge from under the bridge that crosses the inlet. The conditions are not ideal for smaller craft, not that everyone is heeding the warnings (see yesterday’s post).

Today we had 2 extremely interesting moments wrapped between all the “usual” beautiful boats, scenery, and people in Haulover Inlet videos.

1st we have a sportfish with a tuna tower. The captain and 2 companions are at the Flybridge helm. A woman is sprawled on the bench seat on the side and the captain and a friend are behind the helm. The waves are BIG as they are exiting the inlet and the boat bobs up and down quite a bit. The man next to the captain is trying to stand with one hand grasping a rail above him, he appears to be struggling to stay upright. A huge impact sends him face first into the console in front of him. The captain reaches over with one arm and steadies his friend. The shaken man goes to his knees and collects himself as the captain keeps him steady with the one arm and continues motoring out to the Atlantic.

Luckily this passenger only lost what looked like an iPad or a small hatch cover from the console, he came close to toppling over the railing and down onto the stern of the boat. That would be painful to say the least.

Click here to skip directly to this part of the video

Update: New footage from ZipZap Power shows that this guy decided to be safe and ride home down on the deck, grasping the ladder!

Next, in the same Haulover Inlet video, we have the captain of what looks like a Princess Yacht that appears to be all alone. If he has guests they are in the cabin. The seas are big enough to throw the large yacht around like a toy in a bathtub. The yacht’s tender is mounted to the swim platform and all wrapped up, looks to be a small tender similar to the one in yesterday’s post.

As the seas push the yacht around the tender appears to be somewhat loose. For a moment the captain appears to be going down to check on the tender, oh nope he is just leaving the helm unattended and going into the cabin. Now he’s back at the helm

The next time we see the yacht the Captain is making his way back in from the Atlantic. Suddenly behind the yacht we see the tender just floating away in the high seas! Soon we observe a towboat and a couple police boats circling the loose tender. The yacht Captain was completely oblivious as he motored away. The police boats get the tender near shore and beach it, apparently the owner came back later and retrieved it.

Click here to skip to this exact part of the video

As you can see anything can happen at Haulover Inlet, I’ve had people ask “is it really that crazy out there” and based on what I see yes, yes it is! If the Inlet was full of careful Captains that traverse it every day, like the beautiful old sportfish called Therapy or the Jolly Roger Fishing team, these videos probably wouldn’t exist, but there are enough noobs, careless people, beautiful people, and good stories to support a fleet of Haulover Inlet videos.