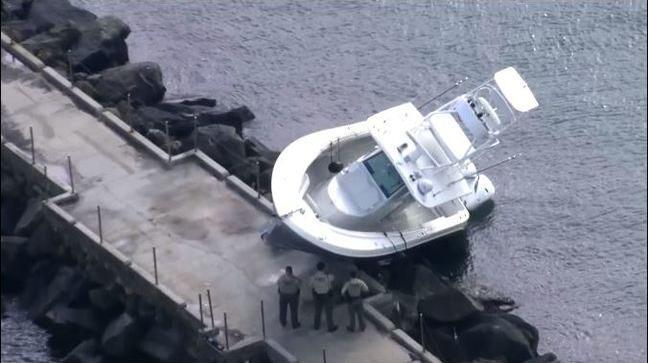 The 42 Foot HCB that crashed into the jetty at Dania Beach was brand new and was not even registered yet.

Daniel Towriss, the CEO of an insurance company with $37 billion in assets, was the owner of the 42-foot HCB Custom boat, according to the Florida Fish and Wildlife Conservation Commission.

It is unclear where or when Towriss bought the boat, but under state law, owners have up to 30 days to register new boats with their local tax collector’s office. A state wildlife commission report shows that the documentation for the boat’s registration was pending.

One of the other boat occupants, Lauren Silagy, was celebrating her birthday during the late-night outing: She had just turned 33 years old when the boat crashed early Tuesday. In addition to Towriss, 47, and Silagy, the other people aboard were Jarret Silagy, 39, and Cassidy Rudman, 25, the state wildlife commission said.

The boat slammed into the unlit Dania Beach State Park jetty just after midnight, leaving the vessel stuck a a precarious angle, wedged on the rocks. It took a great amount of time and effort to deal with the unstable craft: Rescue teams used struts to secure the boat in place and to keep it from falling on them.

FWC officials are still investigating the accident so certain details — including who was piloting the vessel — remain unavailable. Towriss and the three other people couldn’t be reached for comment in phone calls this week.

Records show all 4 passengers are from Indiana. Employees of Portside Marine Sales and Service, a Cicero, Indiana, boat dealer, confirmed that passenger Jarret Silagy is president of that company. The website for $37 billion insurance company Group 1001 lists Daniel Towriss as its president and CEO. Towriss bought a Fort Lauderdale waterfront mansion in 2016, according to county property records.

All four passengers were injured in the collision, which threw 2 of them from the boat and on to the jetty.

Navigational charts show that the boat was far, hundreds of feet, from the channel markers that designate the entrance of the channel, the markers stand about a quarter of a nautical mile west from the end of the jetty.

That means the boat was likely traveling northward over shallow water before it rammed the jetty in a botched attempt to enter the Port Everglades Inlet. The jetty separates the 450-foot-wide, near 50 foot deep shipping channel from the shallow continental shelf. No word on Mr. Towriss’ experience with boats or navigational equipment, the HCB was outfitted with all the good technology including FLIR, Radar, and depthfinders.

Clarifying one statement that caused much discussion on our Facebook page, we consider the boat a total loss from an insurance perspective.  With the boat that heavily damaged, the insurance company (oh the irony here), will cut Mr. Towriss a check for the boat.  It will be sold as-is or parted out and the engines sold separately, someone with the skills could probably bring the boat to working condition, including Mr. Towriss himself.  In terms of this boat, it is my belief that the insurance company will consider it totaled even if parts of it or all of it could be seaworthy again.

The passengers of this boat were lucky to survive we can all recall the Florida boat crash that caused the death of Marlins Pitcher Jose Fernandez. There was a call for better navigational markers after the accident, no study has been started at the Dania Beach jetty yet.