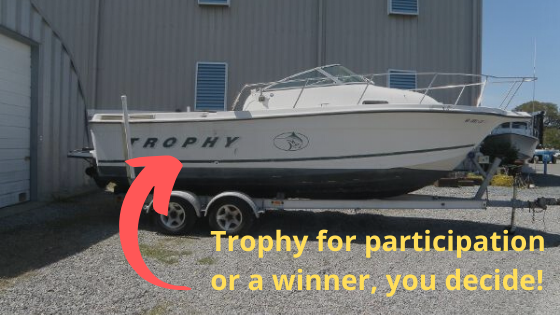 Today’s bargain Trophy boat was sent to us by a Facebook follower who has asked to remain nameless. Remember if you see a boat bargain head to this page and submit your find or email us at bargains@hauloverinlet.com : https://hauloverinlet.com/contact-us/submit-a-boat-bargain/

Today we have what, on the surface, looks like a steal of a deal. A 23 foot Trophy walkaround fishing boat in good mechanical shape with a Lowrance Elite 7 Fishfinder for under $3000? Sure its got some cosmetic issues, primarily in the grime department, but this seems too good to be true! Get yourself some Boater’s Edge Mildew Remover and it should clean right up! It has a livewell, small cabin with sink and head, and an I/O.

This boat is listed for $2999 on Boat Trader in Norfolk, VA:

The Trophy line was Bayliner’s name for its fishing boats, the full story is at the end of this article for those that are interested (credit aboater at Hulltruth for this). Essentially Bayliner was known for its cruisers and bowriders and chose a different brand to market its fishing line, eventually they made some decent boats. This was one of those later examples.

We don’t need to get too into the weeds about their history to decide if this is a bargain or not. A working 23′ fishing boat that appears to have no “major” flaws for $2999. Sold as-is it appears to need a good cleaning and touchup, they claim its mechanically sound. The cheapest comparable Trophy is the same size and year, listed for $17,000! Others are listed for over $20,000. Sure its cleaner and “better”, but is it $14k+ better? We’ll let you decide in the poll below.

If you’re looking for a history lesson on Trophys, as the thread title suggests, the Trophy brand name started out as Bayliner’s fishing boat line in the early 80’s. Their Trophy line was anything that Bayliner built that was designed for fishing (or as the folks in the business would say, “had a rod-holder screwed on”. It included bass boats, CC’s, cuddy’s and small cruisers. Even their 25′ flybridge was considered a Trophy for a few model years until it fell under the Ciera model name. They all sailed under the US Marine branding.

They were built to std Bayliner specs. Nothing more, nothing less. Chopper gun construction, pop-riveted hull/deck joinery, chrome-zamak hardware, etc… They used the same seats, interior components, and swim steps. In fact, the metal cockpit steps, footrests, and transom swimsteps had the Bayliner name casted in. Most had engines that some felt were underpowered for the size boat. They were called Trophy by Bayliner.

Near the 2000 model year, Brunswick decided to remove the Bayliner name from the Trophy line, and they started a full-fledged ad campaign that tried to convince buyers that they were a seperate brand from Bayliner. The build quality improved, and they used upgraded hardware over their B-liner sisters, as well as a longer warranty.

Yes, Brunswick would like buyers to think that the Trophy’s are their own BRAND (like Whaler, Sea Ray, Sea Pro, etc..), but they aren’t. They are still the fishing boat line of Bayliner, just as the “new” Meridian line is the larger cruiser line of boats by Bayliner. It’s all about the marketing…

Today’s Trophy’s are MUCH better than their boats of yester-year. They no longer deserve the bad rap that they once did. In fact, some of their models are designed much better than other supposed “top tier” brands. The tall windshields, the dashboards which allow for todays larger flush mounted electronics, and cockpits that have been designed by someone who actually knows what a fishing rod is, are just a few of the features that the current boats have to offer. And all at a price that is reasonable, especially when compared to the “supposed” top tier boats that don’t offer half as much “overall-fishability”.

Want to see another bargain? Check out this cheap speed Scarab Panther 30: 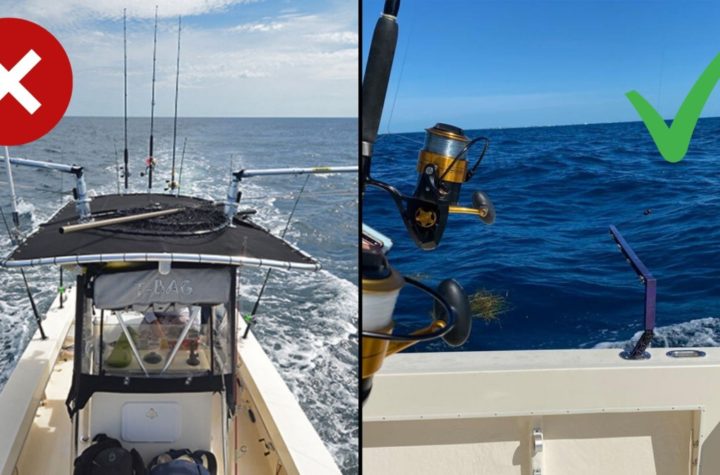