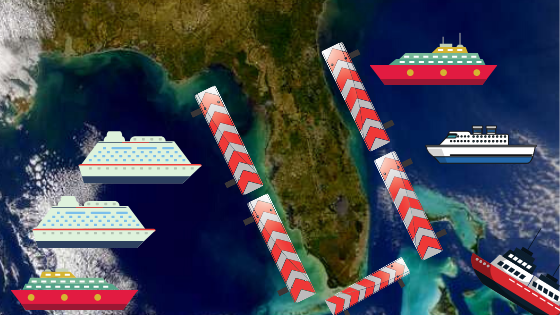 The U.S. Coast Guard has directed all cruise ships to remain at sea where they may be sequestered “indefinitely” during the coronavirus pandemic.

The ships should be ready to send any severely ill passengers to the countries where the vessels are registered.

For most of South Florida’s cruise liners, that means the Bahamas.

The rules, which apply to any vessel carrying more than 50 people, were issued in a March 29 safety bulletin signed by Coast Guard Rear Admiral E.C. Jones, whose district includes Florida.

More than two dozen cruise ships are either lined up at Port Miami and Port Everglades or waiting offshore, the Miami Herald reported.

Most have only crew members aboard, but several still carry passengers that are expected back at Florida ports.

Carnival Cruise lines notified the government on Tuesday that it has more than 6,000 passengers still stuck at sea.

Federal, state and local officials have been negotiating over 2 Holland America cruise ships that had been stranded off the coast of Panama with sick and dead passengers. They are trying to dock at Port Everglades. More than 300 American citizens are on the two ships.

Two of four deaths on the Cruise Liner Zaandam have been blamed on COVID-19 and nine people have tested positive for the virus.

Florida Gov. Ron DeSantis said Tuesday that the state’s healthcare system is stretched too thin to take on the coronavirus caseload from the cruise ship.

“Just to drop people off at the place where we’re having the highest number of cases right now just doesn’t make a whole lot of sense,” DeSantis said.

Desantis just issued a stay at home order for the entire state of Florida.