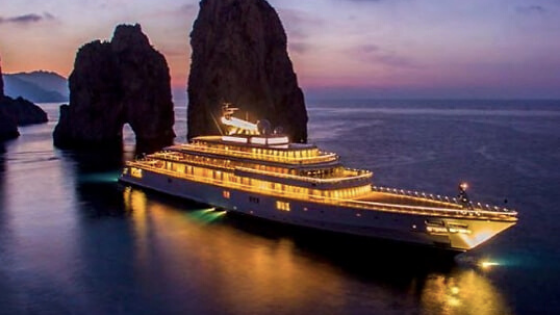 While many of us are posting pictures of a messy and cluttered house full of home schooled kids, hand sanitizer, empty wine bottles, and long hair; billionaires are enjoying their social distancing in much different ways. Frankly most of them have earned it, but posting about it on Instagram is bound to bring criticism.

What’s amazing about these pics is that they had to be taken by a drone or helicopter, “hey guys lets get the drone up there to capture the sunset so I can make a nice Instagram post”. Its quite a lifestyle.

“Isolated in the Grenadines avoiding the virus,” the billionaire, 77, said in an Instagram post. “I’m hoping everybody is staying safe.”

The photos of his luxury confinement aboard the 454-foot Rising Sun, one of the world’s biggest private vessels, triggered an immediate social-media meltdown over the weekend. The blue check brigade was fully activated.

#CARIBBEAN: Billionaire music producer and co-founder of DreamWorks, David Geffen, has found himself self-isolating in the Grenadines aboard his $590 million, 450-ft megayacht Rising Sun, manned by 46 crew and complete with a basketball court, swimming pool and wine cellar. pic.twitter.com/N20BmlRrSW

Someone should park a boat near David Geffen’s yacht and blast 80s Neil Young albums.

Oh, David Geffen is out on his yacht?
Well, I got some news for you David Geffen
I-I-I- got a canoe strapped to a johnboat. https://t.co/bhPF97wUol pic.twitter.com/UvIsC9P3uT

Others found the situation much less amusing.

“This is just shameful and grotesque,” Meghan McCain tweeted Saturday, one of thousands of critical comments.

Thanks, David Geffen, for your thoughts. pic.twitter.com/5XTRhGX5OP

The only real victim here is David Geffen’s Instagram, so lighten up folks and enjoy the fact that you have grounded his drone temporarily.

Here to learn about the yacht? We’ve got the scoop!

Rising Sun is a motor yacht designed by Jon Bannenberg, and built in 2004 by Germany’s Lürssen for Larry Ellison, CEO of Oracle Corporation, and last refitted in 2007. Rising Sun has been owned since 2010 by David Geffen, who had bought a half share of the yacht initially in late 2006.

Its the world’s 10th largest yacht.

The Rising Sun offers a living area of over 26000 sq ft over 5 levels and 10,800 sq ft of deck space lavishly layered in teak. Jacuzzi equipped bathrooms and counters fashioned out of onyx give the yacht an extra luxurious atmosphere. Up to 16 guests can comfortably cruise on the Rising Sun, their every need taken care of by as many as 43 crew members, who can also be easily accommodated on-board. The Rising Sun has a steel hull and aluminum superstructure.. A cruising speed of up to 26 knots can easily be achieved and a maximum speed of up to 28 knots makes longer journeys fly by. To further ensure the absolute comfort and enjoyment of every guest on-board, the luxury yacht is also equipped with a full gym, a well stocked wine cellar, and a sauna and a spa. The basketball court on the main deck also serves as a helicopter pad when required and the private cinema features an enormous screen.

He also owns the Pelorus, a 115 metre luxury motor yacht. Although not as big as the Rising Sun, Geffen’s other yacht is also on the list of largest yachts in the world.

We are just hoping to get back to fishing and tying up at the Sandbar, hopefully we’ll be posting from our boats on Instagram soon!