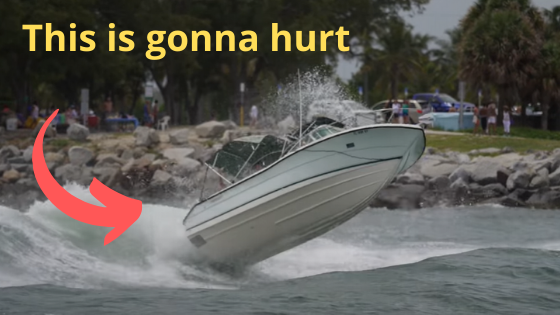 Amazing how fast conditions can change at Haulover Inlet. This particular day started out with great conditions. Boats were just flying through the inlet on their way in and out of the Atlantic. The scenery is amazing with some great boats cruising by at speed including some overloaded boats headed out to party.

We see a large Intrepid center console with dual Mercury outboards. There is a stunning Marlin 350 SF. With its dual Mercury engines this boat can hit speeds of 60mph and higher. He looks to be running wide open as he screams in to the inlet. Then the swells start to build and the drama starts to pick up! As usual at Haulover Inlet many of the boats are headed to Haulover Sandbar . Often smaller bowriders, pontoon boats, flats boats, and even small RIBs will take their chances to get out to the Sandbar. This means overloaded boats with more passengers as they head out to party at the sandbar.

First we see a Yamaha bowrider with twin 1.8 Liter High Output engines. The boat has at least 6 people on board and with its sleek hull its not going to handle the waves very well. The Yamaha repeatedly stuffs the bow, thankfully they had everyone in back staying dry and the boat gets out without much fuss.

The next boat to have trouble gets into a real mess. This boat is a Pursuit walk around, probably a 24 foot. The boat seems under-powered compared with the other boats we see out here with its single Yamaha outboard. Often boats like this in Miami will have 2 outboards for improved power and handling. The Pursuit is also weighed down by a large group. Immediately you see that he’s not using enough power as he heads into the waves. Then he hits the power at the wrong time as he crests the waves. This launches the boat off of them and makes for a hard landing. One of these instances the boat slams down so hard that the boat’s bimini top begins to collapse. As the passengers start to turn green the captain keeps throttling over wave after wave on his way out of the inlet.

The Pursuit eventually gets through the chop at the mouth of the inlet and motors toward the sandbar with his bimini in rough shape.

Keep watching this video for more great footage as the seas build throughout the day. Some highlights include the huge and loud cat that makes an indecisive 360 in the middle of the inlet and the beautiful Vandutch 55 we’ve featured here before.

Here is the full video: