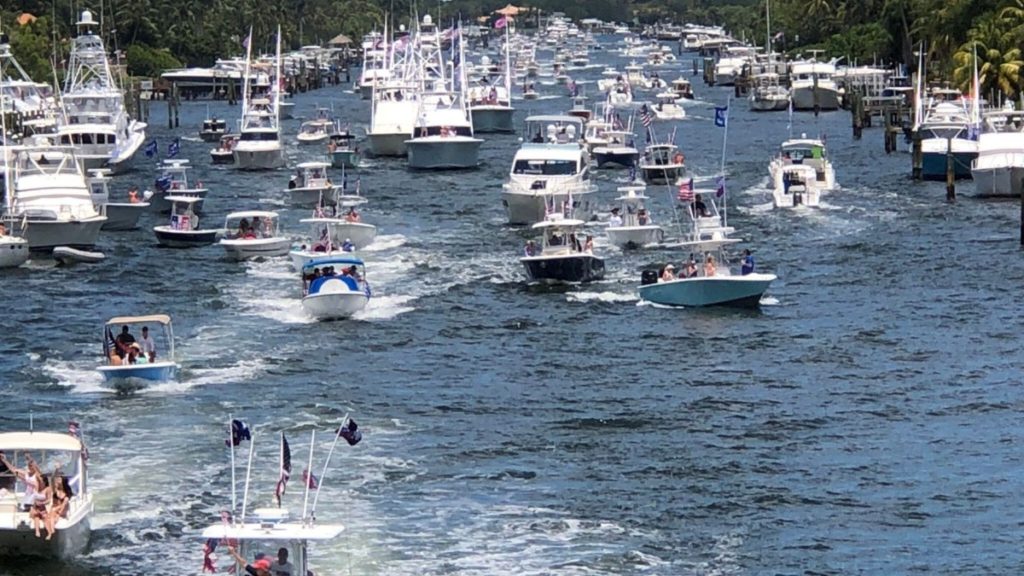 The boat parade departed from Jupiter Inlet and traveled southbound toward Trump’s Mar-a-Lago resort. Helicopter footage showed hundreds of boats of all sizes floating in unison supporting the president.

According to a Facebook event, the Trump boat parade was organized to show “overwhelming support for our PRESIDENT TRUMP.” Thousands of people marked themselves as interested in the event, while more than 870 others said would be attending.

Footage showed what looked to be hundreds of boats and thousands of boaters in the parade, along with hundreds along the shore cheering the event.

The parade was inspired by Jupiter resident Carlos Gavidia who went viral on social media recently for wrapping his boat with a Trump themed design. He had drawn criticism from his property owners’ association for displaying a Trump flag and the design was his response. Carlos is also a COVID 19 Survivor.

The parade caught Trump’s attention and he expressed his gratitude in a tweet saying “I will never let you down!”

Thank you very much to our beautiful “boaters.” I will never let you down! pic.twitter.com/Ot5Ffnjj9G

Just ahead of the parade, boat ramps in Palm Beach County and Miami Dade County re-opened. The ramps and marinas had been, controversially, closed for weeks in an effort to help prevent the spread of the coronavirus. Many boaters felt that closing the ramps was preventing them from doing the one thing that brought them true social distance, boating and fishing outside in the fresh air. However there were so many videos and images of people tied up at Sandbars and not social distancing that officials felt they had to close the ramps. Ramps reopened in Miami on Wednesday.