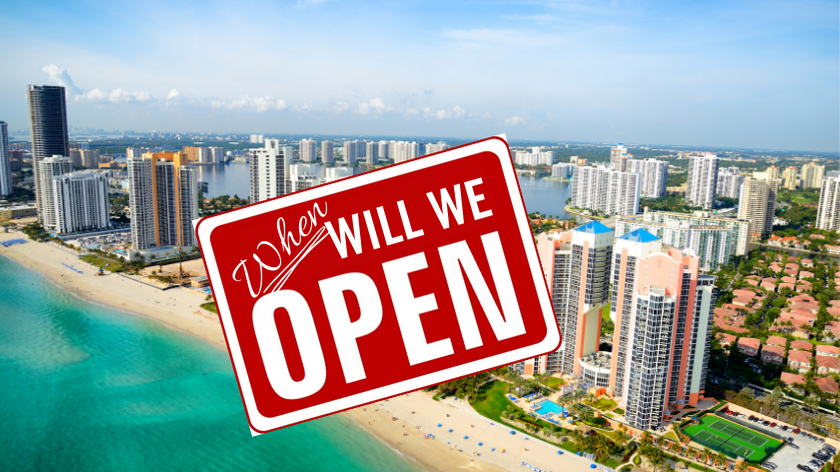 On Friday Governor Ron Desantis gave the green light for some beaches and parks to reopen if it can be done safely, and North Florida beaches became among the first to allow people to return since closures because of the coronavirus. Beaches in Jacksonville were crowded as citizens, desperate to get out of the house, gathered to enjoy the sun and waves. The question on the minds of many Miami residents, when will Miami beaches reopen?

The beaches will be open from 6 to 11 a.m. and 5 to 8 p.m. Gatherings of 50 or more people are prohibited and people must still practice social distancing.

Florida Government officials were criticized for leaving their beaches open during part of the spring break period last month. Almost all counties closed their beaches in response or kept them open with restrictive conditions. Several high-profile beaches in South Florida — including Miami Beach — were closed by state order.

At a news conference in Fort Lauderdale, Gov. Ron DeSantis said some municipalities should feel free to start opening up parks and beaches, if that can be done safely, with distancing guidelines remaining in place.

The governor said it was important for people to have outlets for getting exercise, sunshine and fresh air.

Frustrated citizens have taken to petitions and protests to urge their government to reopen beaches, fishing spots, boat ramps, and marinas. They argue that being out in the sun fishing, swimming, surfing, exercising, or sun bathing is one of the safest things you can do, if social distancing is practiced. Others argue that these should be considered essential rights, protected from government intervention.

A Navy Master Chief in full uniform entered the closed ocean in Emerald Isle, North Carolina, the photo went viral and the town announced that it will reopen its beaches.

Here in Miami Dade a petition to reopen the boat ramps has garnered nearly 7000 signatures as of Saturday morning.

So when will Miami beaches reopen? Comment below with your thoughts.

Will Miami Dade follow suit and allow its citizens to use at least some of its beaches? Tell us what you think!

1 thought on “Beaches allowed to re-open with Governor’s blessing…is the Miami Dade area next?”