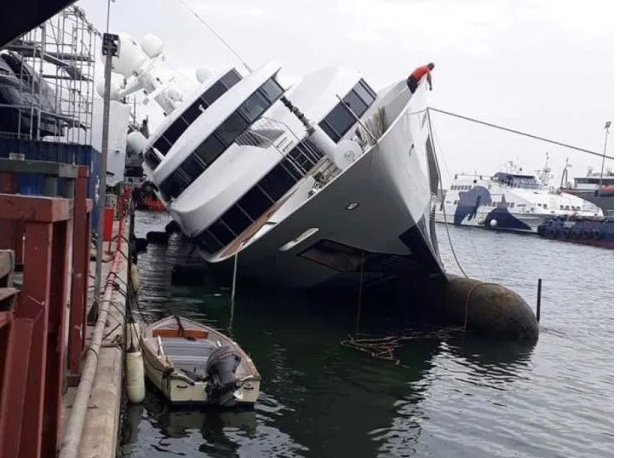 A Saudi Prince’s Yacht, worth $72 MILLION, partially sank after capsizing in Greece.

The 230ft Nourah of Riyad, owned by Prince Turki bin Mohammed bin Fahd Al Saud capsized as it was being lifted out of the water last week for repairs to her hull. Something went wrong and she capsized starboard,

The Saudi Prince’s yacht now sits at a 45 degree angle after becoming partially submerged. There were no reports of injuries after the accident.

The Superyacht boasts 11 cabins for guests including a VIP stateroom and a Master Suite. It weights over 1400 tons and features a jacuzzi and a theater with seating for 9 on board.

A neighboring boat was damaged along with equipment at the shipyard (Perama Athens).

The Donald Starkey designed yacht was built by Yachtley in Turkey in 2008. In 2012 the Nourah of Riyad was refitted at Yachtley. She had a 5 meter extension with a swimming platform and beach club added on.

Certainly the prince will be insured and will have a new yacht built promptly. Prince Turki bin Mohammed bin Fahd Al Saud has a net worth exceeding $1 billion.

Prince Turki Bin Mohammed bin Fahd Al Saud is the son of Prince Muhammed bin Fahd bin Abdulaziz Al Saud. His father owns another superyacht named the Montkaj and a $300+ million Boeing 777. The 256 ft Montkaj was designed by Terence Disdale and built in the Amels Shipyard.

One of many Saudi Superyachts

The Saudi Royal Family owns a variety of ultra expensive superyachts. The most famous of which is the Serene, bought after the Saudi Crown Prince Mohammed Bin Salman spotted the yacht offshore. He dispatched members of his entourage to purchase the yacht from Vodka Legend Yuri Sheffler. The yacht reportedly cost over $600 million and the Russian left the yacht right after the purchase. Allegedly “Salvator Mundi”  a $450 million dollar Leonardo Da Vinci masterpiece is being kept on board the yacht.