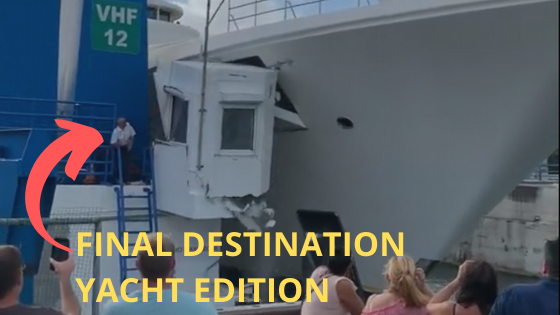 The Superyacht Ecstasea was going through the Simpson Bay Bridge in St Maarten when a hatch that was left open smashed into the bridge operator’s shack, knocking it into the water. The bridge operator thankfully was not in the shack, he was just outside wincing as his office crumbled.

Serving as a gateway to the Caribbean for many superyachts, the Simpson Bay Bridge in St Maarten has seen its fair share of dings and scratches from passing vessels. In fact earlier this year we posted a video of the Superyacht Azteca scraping its hull badly against the bridge. In that incident the bridge was spared major damage, but the yacht surely had hundreds of thousands of dollars in repairs done to get it back in shape.

This weekend the Superyacht Ecstasea was making its way through the bridge and as usual there were many onlookers at a neighboring bar with their phones out, trained on the beautiful yachts coming through the bridge. The Ecstasea gave them something to record as it had an open hatch jutting out on the bow, the office crumbles when the (well-made) hatch pushes into it.

The bridge operator is no doubt thanking his lucky stars that he was outside the shack when the yacht came through.

Check out the video for yourself here:

Check out the last incident we saw at the bridge with the Superyacht Azteca!

Update: The shack’s remains have been cleaned up and traffic continues to flow through the bridge. One upside, the view of the bridge traffic from the famous Simpson Bay Yacht Club has improved! Meanwhile the Ecastasea has been repaired and cleaned up (see below) and was spotted in St Barts with the rest of her billionaire owned friends. Including the 533 foot Eclipse owned by Ecstasea’s former own, Roman Abramovich!

Many, many captains have had white knuckle moments at this bridge. Most get through with at worst a little scratch. Watch it being done right when Steve Jobs’ Feadship is recorded from above as it is expertly maneuvered through the bridge.

Click here to read about the captain that got very lucky as his yacht nearly smacks into the jetty at the Boca Raton inlet: