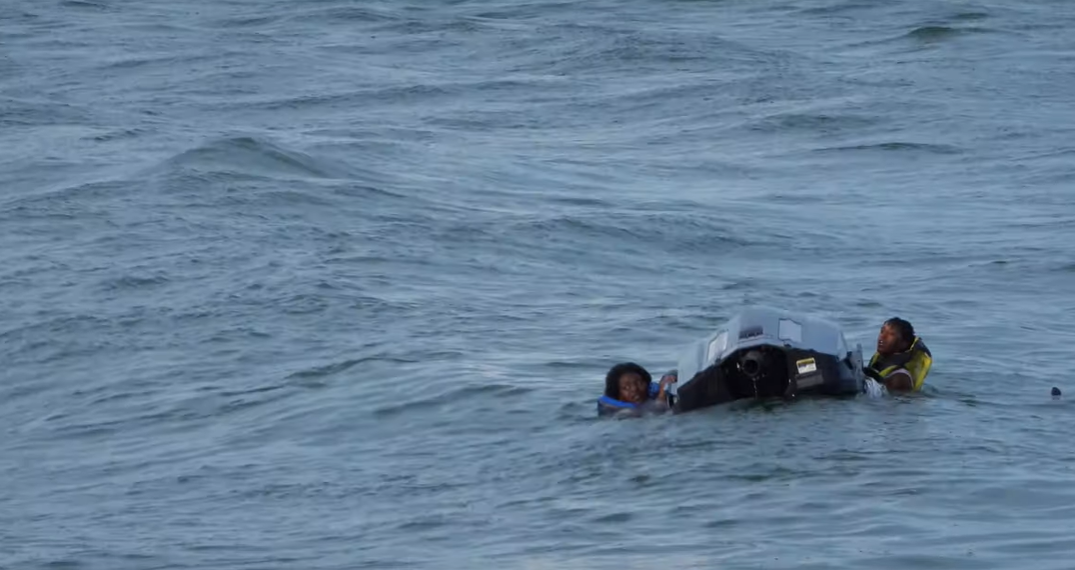 On some days at Haulover Inlet PWCs (personal watercraft) are as plentiful as the waves. On this particular day the tide was low and we had some novice riders out on a Sea-Doo PWC. Novice riders plus low tide are a recipe for a Sea Doo accident. When the water is shallow and you’re at low tide breakers are more prevalent and dangerous.

YouTube channel Wavy Boats is filming when this couple rolls their Sea-Doo PWC. (skip to 2:33) When we catch up with this couple they’ve already turtled the Sea-Doo. Unable to flip it upright they are floating haplessly waiting for help.

Thankfully help comes in the way of a couple on a red Yamaha Waverunner. The woman takes over the Yamaha and her partner jumps in to help the stranded riders. The stranded woman was struggling to pull herself up on to the Sea-Doo. Her smaller companion easily pulls himself up and with the help of the other man works to help her up. She continues struggling and the situation is becoming dangerous as they are sitting ducks just floating in the inlet. She is obviously exhausted from her efforts trying to climb back on the PWC and fighting the waves and current.

After several minutes of struggling the Sea-Doo rider decides he’s going to just tow his partner in with her hanging on the grab bar. (what?!) This seems to be a dangerous idea and he decides against it (possibly on the advice of the other couple). The woman makes another attempt to climb up and ends up flipping the Sea-Doo again.

With the Sea-Doo turtled again the Yamaha couple comes up with a winning plan. The helpful couple switch spots, with the woman jumping in and her partner now piloting the Yamaha. They help the now exhausted woman up on to their Waverunner. This larger PWC appears to be easier to get up on to. The Sea-Doo driver is able to right his PWC and get underway.

Back on solid ground

The bigger Yamaha PWC now holds the couple and the exhausted woman they rescued and heads in to shore. Off camera the lucky (and tired) couple reunite at the docks and (hopefully) thank their rescuers and head home. It is important to mention that everyone had life jackets on which no doubt saved at least one life in this incident. The woman looked to be exhausted and in the strong currents was in real danger. Thankfully this Sea Doo accident had a happy ending

If you continue watching the video you’ll notice the impressive tides and current in the inlet. After the PWC incident a small center console is filmed and appears to be standing still in the current and waves. You’ll also notice that there are many PWC riders buzzing around the turbulent waters. Hopefully they’re more experienced than the couple who had to be rescued.

1 thought on “Bottoms Up! Haulover is a bad place to turtle your Sea-Doo”