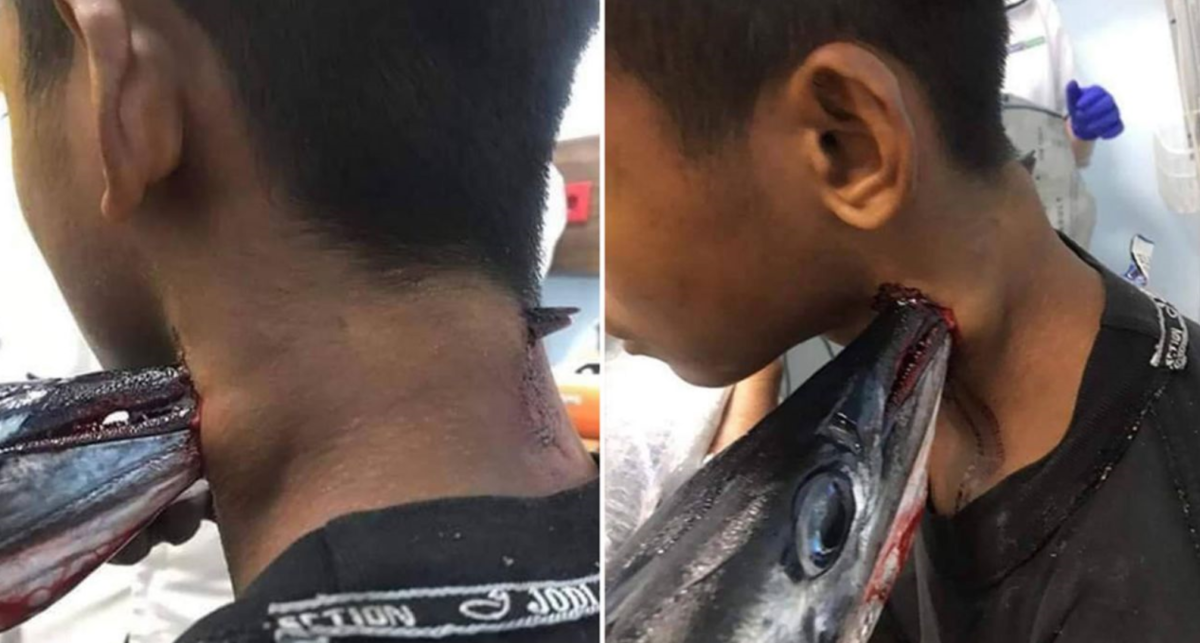 An Indonesian teen is lucky to be alive after he was speared in the neck by a fish. Read on for the full story.

Teenager Muh Idul was fishing with family in Indonesia on Saturday when he was stabbed in the neck by the fish. The needlefish left the teen with a scary injury and a lifelong story to tell.

Britannica says Needlefish are adept jumpers, carnivorous in habit, and distinguished by long, slender jaws equipped with sharp teeth. They are silvery fish, with blue or green backs, and are edible. The family includes some 60 species, the largest growing about 1.2 m (4 feet) long.

Photographs circulating on social media show the fish’s snout pierced through Muh’s neck from right under his chin to under the back of his skull.

The teen was rushed to a hospital in southeast Sulawesi before being transferred to Wahidin Sudirohusodo Hospital in Makassar City to undergo a delicate surgical procedure. Five doctors including three surgeons and two anaesthetists helped to save the boy’s life. The surgical procedure to extract the fish took 2 hours. Dr Syafri Kamsul Arif told the local media the medical team had to be “very careful” due to blood vessels in the neck.

Muh is recovering, but doctors are keeping an eye on him over the next few days in case he gets an infection. The teen was reportedly fishing with his family at the time and it is believed the needlefish “jumped and flew in their direction”.

Pictures of Muh’s injuries horrified people on Social Media after first seeing them on Facebook.

“What a pain in the neck,” one woman wrote.

Some found more humor in Muh’s predicament “only way we catching any fish” said one commenter.

In case you’re stemming the nightmares by believing its a fluke incident, its not the first time a needlefish has killed someone in this manner. Thai Navy Sailor Kriangsak Pengpanich died in December 2018 at the age of 22 after a needlefish pierced his neck while he was taking part in a training excercise.

Muh will no doubt leave the hospital with a story, forever known for being speared in the neck by a fish, luckily he will live to tell it.

Speaking of lucky to be alive, did you see this story? A $1m boat crashes at speed into the jetty at Dania Beach and everyone will recover.